If you like the Honda CR-Z hybrid, then you will love the 2016 model. This model features a refresh that includes numerous cosmetic upgrades. Although official photos haven’t been released yet, there are leaked photos that give us an idea of what the Honda-confirmed refresh will include. 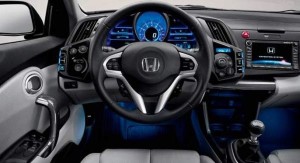 The leaked photos come from a Chinese website and include both an interior and exterior shot to give drivers and auto enthusiasts an idea of what is to come. Looking at the pictures, you can tell that the lower fascia is racier and has a splitter-like element, which leads into the enlarged section dedicated to the fog-lamps. You will also notice the rear bumper is resculpted, the headlamps are elongated, the side skirts are new, and the wheels are also brand new. The interior photos show an electronic pull tab where the conventional handbrake lever would be
and a new center armrest. Although the photos are too grainy to see much detail, experts predict that the latest version of HondaLink infotainment will make its way into the 2016 CR-Z.

Experts predict that we won’t see an upgrade to the Honda CR-Z’s current powertrain until the 2018 model. At that point, it should get more powerful. While the CR-Z isn’t as popular as certain Honda models, like the Civic or Accord hybrids, it does stay ahead of the competition, offering drivers unique styling and features.

Head to O’Daniel Honda in Omaha, Nebraska, to check out the current Honda CR-Z or learn more about the 2016 model. While there, sign up for updates so you will be the first to know when new information is announced.